The Seacoast Community Chorus was founded in 1971. 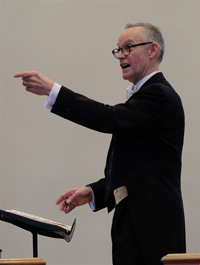 Wendell Scott Purrington has been busy following his retirement as Performing Arts Department Chair for the Portsmouth (NH) School District. During his 36-year tenure there, he conducted all of the high school and middle school choirs and served as musical director for more than three dozen musicals. Currently Wendell co-directs the Fourth Street Jazz Choir in Dover, is the Director of Music Ministries at York First Parish Church, and is a member of the American Choral Directors Association and the American Guild of Organists. He earned a Master of Music degree in Choral Conducting from New England Conservatory, and has conducted many festival and All State choirs throughout New England. He was musical director for six summer productions at the Prescott Park Arts Festival. Mr. Purrington has been the guest conductor for many choral ensembles. He has performed as a tenor soloist with several ensembles in Northern New England. His leadership helped establish the annual Messiah-Sing at the Portsmouth Music Hall. Wendell served as chorus master for the Ogunquit Playhouse’s summer 2016 production of Hunchback of Notre Dame. This year marks the twenty-sixth year of Mr. Purrington’s leadership as Musical Director and conductor of Seacoast Community Chorus. He has led the chorus on five concert tours to Europe—most recently, SCC’s trip to Scandinavia during the summer of 2017.

Kim holds a Bachelor of Music in Piano Performance from the University of Lowell and performs in solo recitals throughout the area. This past October she raised $1200 for The Alzheimer’s Association in a benefit concert held in New Hampshire.  She teaches piano in her private studio in Cape Neddick.  She accompanies the Seaglass Chorale and Marshwood Middle School Choruses, as well as the Seacoast Community Chorus. Kim is also the Organist/Music Director for the Congregational Church of Topsfield, MA.